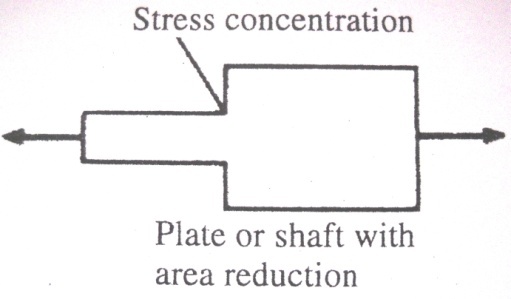 So the problem becomes amenable, let's consider a relatively small fillet placed at the step to reduce the stress concentration to a finite value. 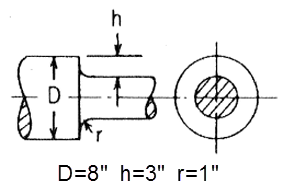 Calculate the axial stress concentration factor and compare it to the formula provided in Roark's Formulas for Stress and Strain, Warren C. Young and Richard G. Budynas, 2002.

The purpose of this tutorial is to showcase perhaps the simplest stress concentration and point out that it can be resolved in 2 or 3 dimensions. Simple one-dimensional elements (i.e. simple axial bar elements) that capture constant stress within an element are insufficient to capture stress concentrations, even when many elements are used. That is to say, when the necessary physics is not contained in the element formulation, so-called h-convergence or using more elements captures "no more" of the solution than does a coars(er) discretization. This tutorial is meant to highlight where it is relatively straightforward to apply FEA and resolve a solution correctly that belies analytical treatment with uniaxial formulae (such as axial_stress = P/A).