Now that we have our results, it is important that we check to see that our computational simulation is accurate. One possible way of accomplishing this task is comparing to the pre-calculations, as we did in the results section. Another way to check our results is by refining the mesh further. The smaller the elements in the mesh, the more accurate our simulation will be, but the simulation will take longer. To refine the mesh, look to the outline tree and click Mesh > Body Sizing Change the element sizing to .05 (half the size of the mesh we originally tried). The new mesh looks like this . It has twice as many elements as the original.

As one can see from the table above the results do not change greatly as the mesh is refined. This means we don't need to refine the mesh further.

A more thorough and professional verification of the ANSYS bicycle crank simulation was done by setting up the crank under the same boundary conditions as in the tutorial and using digital image correlation technology with the software ARAMIS to find the strain field along the face of the crank. This was done to show how the verification and validation step can be accomplished in the industry using state of the art technology.

Digital image correlation is a technology that uses cameras to watch the movements of a mechanical part as it is being loaded. From the deformations of the part, ARAMIS is able to calculate a strain field across the entire part. This strain field can than be used to find local strains by modeling strain gauges within the software.

The ARAMIS works in a similar fashion to a finite element analysis. First the part to be loaded is painted with a speckled pattern, and a picture is taken at the zero load state. ARAMIS maps facets, essentially two dimensional elements, to the speckled pattern. Each facet contains a unique pattern of speckles within it, and ARAMIS tracks the movements of each of these patterns while the part is being loaded. The facet size can be adjusted, just as the element size in FEA software can. Multiple pictures are taken as the load is applied to the part, and at each stage the ARAMIS calculates strain fields in the X  and Y directions, along with other results such as Von Mises strain and shear angle. The results are mapped to the face of the part as contours. 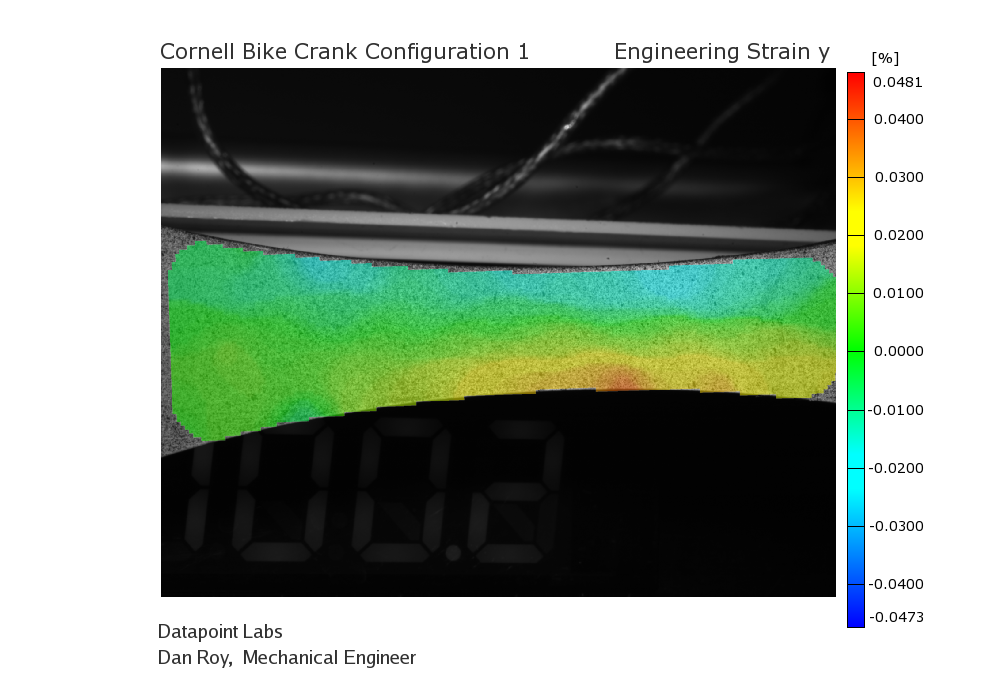 ARAMIS was used to obtain the X and Y strain fields for a bike crank made from Al 6061 T6, and an ANSYS model of the same geometry and loading conditions was created. The results of the strain fields output are shown below: 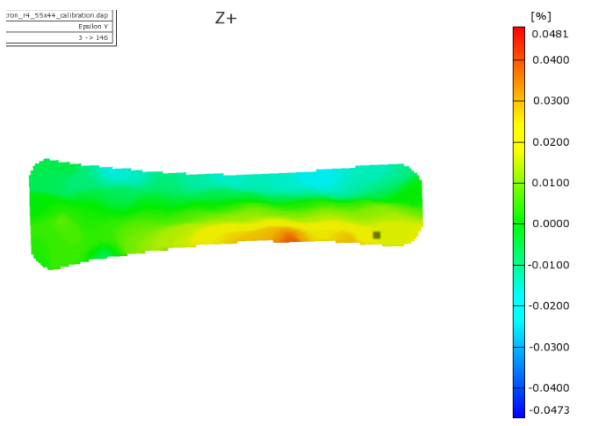 The contours given by ANSYS match the ARAMIS contours of the strain fields very well. We can even see that ANSYS correctly matches the regions where the strain is most concentrated, which is not in the middle of the crank  as one might first expect. ARAMIS shows that ANSYS is correct in having the strain concentrations slightly to the right of the center. The ARAMIS X-strain field does show a more spread out area of high strain magnitude on the bottom edge of the crank, but this discrepancy is most likely due to the fact that the experiment is not run under ideal conditions as the ANSYS model is.

The magnitudes of the range of the ARAMIS contours were scaled to match those given by ANSYS, so the colors on the ARAMIS strain fields represent the same magnitude of strain as the colors in the ANSYS fields. ANSYS shows slightly higher strain magnitudes along the top and bottom edges of the crank, but besides this discrepancy, the strain field's magnitudes match fairly well.

Strain gauges were also added to both the ARAMIS strain fields and the ANSYS model. One gauge was placed on the top half of the crank, the other on the bottom half. The gauges used were the same dimensions and placed in the same positions in both ARAMIS and ANSYS. X and Y strain values were obtained from both:

The strains in the Y direction are predicted by ANSYS to be higher by about one-hundred micro-strain than the values that ARAMIS reports. This discrepancy was explored in more detail with further gauging experiments. It appears that the Poisson's Ratio of the bike crank used is not the expected .34 but is in fact lower. As the Poisson's Ratio was decreased within ANSYS, the Y-strain gauge values began to match the ARAMIS values.

ANSYS accurately predicts the regions and magnitudes of the strain concentrations in the direction with the greatest strains. It also accurately reports X-strain gauge values. The X-direction is also of more interest because it has higher strains. Even though the Y-direction did not have as close of a correlation, the discrepancy is believed to be due to the material properties of the bicycle crank.